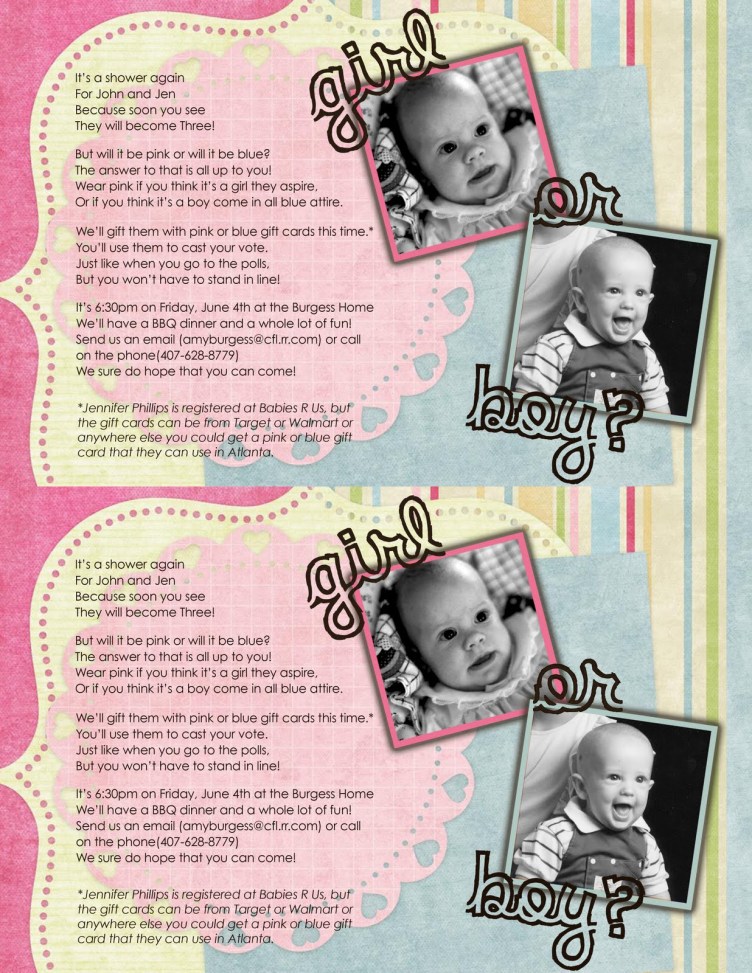 Our first baby shower invites! How adorable are those?! And, yes, that is a baby picture of me and one of John :o)

The only picture I have of our first shower! (And, I stole it from Sarah’s Twitter, thanks!) Jennifer G took some pictures for us, but I just haven’t gotten them yet. So, there’s us and the super yummy cake! The inside of the cake was the top layer colored pink and the bottom layer was colored blue. How cute is that?!

Well, let me tell you, these ladies pulled off such a fun shower! There were pink and blue decorations everywhere, so adorable. I already told you about the cool cake, which was super yummy with raspberry filling (I may or may not have wished I had some here at the house this morning…). Everyone was instructed via the invite to wear pink or blue depending on what they thought we were having. I repped the pink and John repped the blue. We came as a unit and wanted to show we will glady take either!! There were two “ballot boxes” set up where people could put their card (we did a gift card shower since it was much easier to travel with) to vote whether they thought we were having a boy or a girl. Each box was decorated pink or blue! Then, for the shower games, we did lots of old wives tales to figure out what we are having!

Now, much to our surprise, both the old wive’s tales AND the ballot box votes came out to…

BOY!!
John and I were both shocked! We were expecting the ballots to come out to girl! I think mainly because the only thing people have said in conversation is that they think we’re having a girl. So, we just kind of assumed everything would come out to girl. John and I kept laughing that if God had a sense of humor, we would end up with a boy and everything in the scrapbook would look all pink from the shower, haha. But, we expected wrong!

I think we have both just kind of guessed girl without really having any strong assumptions, so we walked away from the shower really believing that we will be totally surprised when this baby comes along! People ask me all the time if I think I know what we’re having, so here’s my response, in case you’re wondering, too!

“If I had to make a guess, put a gun to my head to take a jab at it, I would say girl. But, I don’t really have any basis for that! Some days I think boy, some days I think girl! So, we’ll just have to wait and see! Either way, we couldn’t be more excited!”

If you had anything to do with our shower…we LOVED it! So much fun, super yummy food and so great to feel all the love for us and the baybay. Plus, the gift cards were a huge blessing! We have already been able to get lots of essential items on sale (score!) and I have been overwhelmed with thankfulness. As many of you know, our major goal as a family right now is to get out of debt. I am glad to say we are making progress (although some days it feels like we are never going to get there!) and we have not created one new ounce of debt since we got married (and our wedding was debt-free!). It’s nice to be able to purchase stuff for the baby with gifts from people that love us and this child. Thank you seems inadequate!!

We are having another baby shower in Texas at John’s sister’s new house on June 17th! We are so excited to see family and friends that evening (and week!). For all you Texas peeps, we are so thrilled it worked out for us to see all of you while we’re expecting! All of you are such a huge blessing as well!

I just love that so many people love our baby, too :o)